How Centrus LLC Helped Turn a Company Around to Profitability

From the dot.com boom in the late 1990s to the telecommunications bust in 2002, Lionel Tobin, President of Stuart Integrated Systems, has experienced these volatile market highs and lows first-hand.

Less than a year later, when the telecom industry began its rapid decline, Wire America’s sales plummeted. Unwilling to file for bankruptcy protection, Tobin shut down the company in 2002 and began selling off inventory to pay creditors.

During this same time, he was also trying to keep his new company, Stuart Manufacturing, afloat. “To do that, we needed to increase our lines of credit,” continued Tobin. “Because of Wire America’s collapse, banks were nervous and unwilling to work with Stuart.”

WE CAN SOLVE THIS

“Through our contacts and relationships, Centrus was able to open doors with financial institutions for Stuart Manufacturing where they had no previous success on their own,” Jerry Norton of The Centrus LLC stated. “Our financial presentation showcased the company in its best light. What’s more, Lionel Tobin and his management team implemented many of our suggestions and made significant improvements to their operations. They turned the company from marginal sales volume and profitability to 10% net profit in record time.”

In less than a year, banks were lining up to help. “It suddenly turned into a banking frenzy,” Tobin commented. “Very quickly, several major institutions were willing to increase Stuart’s credit lines to help us grow.”

Today, with 205 employees, Stuart Integrated Systems’ sales are steadily improving. “Under Lionel’s leadership, the company did everything right to make Stuart succeed,” Terry Humphrey of The Centrus LLC, stated “It’s Centrus’s job to think outside the box to help companies succeed. It’s particularly gratifying to work with a company like Stuart, who embraced our advice and improved customer satisfaction, enabling them to increase sales and double their staff.” 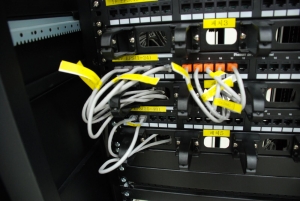